There's this columnist who writes for the Calendar section of the Orlando Sentinel on Fridays -- he calls himself Commander Coconut. I love this guy. When I'm reading the paper, I usually find myself muttering things out loud, most often in the form of invectives directed at some politician, or generalized grumblings over the state of the world. But with Commander Coconut, I smile and laugh and say things like "Yes!" or "Exactly!" or "I couldn't agree more!" His column is usually a bunch of musings about sundry things, many of which relate to the entertainment field: celebrities, movies, and what not. I'm not too big on pop culture -- my sense is that we're all victims of a pop culture overload. But I like Commander Coconut so much, I think, because despite our generational differences (I suspect, though I'm not certain, that he is much older than I), I tend to agree with many of his opinions. And many of his opinions tend to be contrary to popular opinion. And therein lies the attraction . . . Anyone who really knows me, knows, at heart, I am a contrarian.

So, in honor of Commander Coconut, I give you some of my own musings (some pop culture related, some not, some contrary, some not).

1. Am I the only one who doesn't think Ugly Betty is all that ugly? I mean, just because Hollywood puts glasses and braces on a girl doesn't automatically make her ugly. Anyone can see that underneath the appliances is a decent looking actress. Somehow, I think if they'd used a truly ugly girl, the show would have had more meaning.

2. Do you think the radio stations were paid to start playing "Bad Day" over and over again just before the new season of American Idol started? The song had been played to death last year, and it seemed to have finally gone away, but then I noticed that in the weeks running up to the new season, it had been resurrected.

3. I finally got a chance to see "Crash" and "Hotel Rwanda" -- both were amazing, though depressing, movies. Probably need a good comedy next. Instead, The Constant Gardener is next in line on my Netflix list . . . oh well. I read the book and enjoyed it; hope the movie is just as good.

4. I have to admit I'm becoming a Stephen King convert. Now, I don't have a lot to go on yet. I've always been a bit anti-Stephen King -- based upon the movies made of his novels, I assumed his writing would be formulaic, and I never liked horror anyway. I first read him when he used to write a column for Newsweek, I think it was, and I found that I really enjoyed the columns and often agreed with what he had to say. Then, a while back, my husband brought home On Writing, a non-fiction book by King about his career, how it was derailed when he was hit by a car, and his subsequent struggle to begin writing again. It was really, really good; I found myself recommending it to everyone, not just to other writers. In it, he discusses some of his early novels, and I must admit, just reading about his process of writing those works piqued my interest. Recently, a neighbor loaned me one of his most recent novels, Lisey's Story, and though it's dense and at times hard to get through, I thoroughly enjoyed it. And, what shocked me the most, his writing is quite lyrical. Anyway, I'm hooked and looking forward to the next Stephen King novel -- which for me, may be his first. I might just have to start at the beginning.

5. If our government truly believes that "all men are created equal, that they are endowed by their Creator with certain unalienable Rights, that among these are Life, Liberty and the pursuit of Happiness," then can someone tell me why our current administration (and many citizens, judging by the letters to the editor I read in the paper) thinks that only Americans are entitled to these unalienable rights???? I mean, in my world, a human is a human is a human -- I don't care which country they come from . . . It's seems to me that we grant our citizens certain protections because we believe it's right to do so, not just because there's an official piece of paper that tells us we must . . . If it's right to do so, then isn't it right to do so for everyone . . .?

6. A lot of people ask me how I ever finished writing a whole novel. It reminds me of when I lost about 40 pounds some years ago, and everyone asked me how I managed to do it. It's as if everyone expects I will give them my "secret" for achieving these things -- as if they don't already know the answer. Of course, both in writing and in weight loss, people do want it to be easy -- why else would there be so many products sold that promise quick and easy results? But deep down, everyone already knows the answer. To write a novel, you just have to put your butt in the chair and write. Every day. On a regular basis. It's called discipline. Writing has to be like any other obligation. It can't be one of those things that you get to when you've finished everything else, because you'll never finish everything else, and you know it. You can't wait until you're "inspired" because as nice as that sounds, the inspiration usually hits after you've been writing for a while. Which brings me to the weight loss -- because, like writing, it's all a matter of discipline. The answer is easy: exercise more, eat less. It's that simple. It's not easy, but it is simple. (Now, before someone gets on me, I'm talking about the average, otherwise healthy person -- I know there are certain medical situations where this doesn't hold true). And you have to really want to do it, whether it's writing a book or losing weight. If you're going to write a book, it's best to actually enjoy the act of writing . . . Don't do it thinking you'll get rich or be invited to appear on Oprah. Such motivation won't sustain you for very long. As for losing weight, well, I can't ever admit to enjoy eating less -- I love food too much -- but I have experienced runner's high, and having gained back about 20 of those 40 pounds I lost, I will be the first to attest to how much better I felt when I was slimmer, fitter, and stronger. But -- and this brings me back to my original point (about already knowing the answer to the question) -- I know exactly why I gained those pounds back. I'd been exercising a lot less, and eating a lot more. It's as simple as that. So . . . today I laced up my sneakers and hit the pavement, and guess what? It felt good. And afterwards, I noticed, that banana on the kitchen counter sounded a lot more appetizing than a muffin . . .
Posted by Julie Compton at 11:43 PM No comments:

I'm happy to report that Rick found his camera! We thought it had been stolen, and needless to say, I was upset because it contained the only pictures from the Wilmington and Deland booksignings. Actually, the truth is that my friend Debbie found the camera -- unbeknownst to us, we'd left it at her house on Thanksgiving.

So, here I am outside the Ninth Street Book Shop in Wilmington, Delaware on November 10, 2006. To the right is my youngest daughter, Sally, and to the left is Gemma Buckley, owner of the book store. 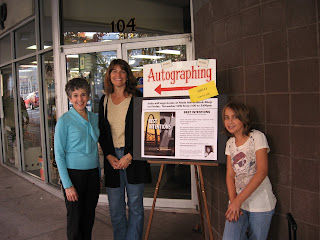 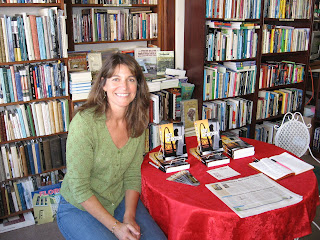 Posted by Julie Compton at 11:28 PM No comments: