Really, there is a connection here between the two . . . I promise.

Finally got the bike -- it'll be two weeks this Saturday but last week with Tropical Storm Fay, I didn't get a chance to ride it much. Today I rode with my youngest on the back to her busstop. This is my risk-taker child, and she freaked out about the helmet, of all things! "I can't breathe! It's making me feel claustrophobic!" The possibility that she could break her head open or scrape across the pavement as her skin peels off didn't seem to faze her. She was bothered by that hard bubble on her head! I reminded her that if she wants to skydive (which she claims to want to do, and I believe her; we are alike in our risk-taking propensities), she'll have to wear a helmet for that, too.

So the motorcycle desire was always there, dormant in the recesses of my brain from when I used to ride on the back of my brother's bike, but when we moved to Florida -- where motorcycles are everywhere -- it began to push its way to the front. Somewhere along the way I decided to make the protagonist of my second novel a biker. Nothing hardcore. He's just a guy who likes to ride and his mode of transportation is a bike. He's a Floridian, and it just seemed to fit him. But the more I wrote, the more I wanted to be riding a bike myself. And I figured, hey, it can only improve the writing, right? ;-) So last May I took the rider safety course and got my motorcycle endorsement. And for my birthday in June, my wonderful hubby totally surprised me by giving me a gift certificate with the picture of a Harley on it; it was his way of giving me his blessing to get a bike. When we finally stopped traveling this summer, and I had time to do my research, I found the one I wanted and it was delivered just as Fay was making her way through the Caribbean . . . 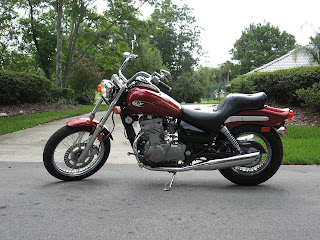 Meanwhile, I'm back to working on revisions to the novel. (Or that's what I'm supposed to be doing, instead of writing blog posts). But I'm having trouble with my ending. I made a big change to the story after the fact, and the change really affects my end, so it's the one thing I still need to revise, but I haven't been able to yet. (In fact, I don't think I should even use the word "revise" -- I think I'll be writing what will essentially be a whole new last chapter . . . ) I've been spending a lot of time thinking about it, but when I'm on Inked-In or doing other things, I always have the sense that I should be writing the ending, not thinking about it. But I know that if I'm not careful, it can easily slip into the "cheesy" category and I do not want that to happen. So am I avoiding? Or is all this "thinking" I'm doing just something I have to do before I can get down to business? In the past, whenever I've been stumped about a plot point or how to do a scene, it does eventually come to me, often at the most unlikely times . . . So maybe all this fretting is for naught . . .

Oh, and yes, I think riding the bike has helped with the authenticity in the writing! ;-)
Posted by Julie Compton at 12:00 PM 5 comments: