Was I Really in England This Time Last Week? 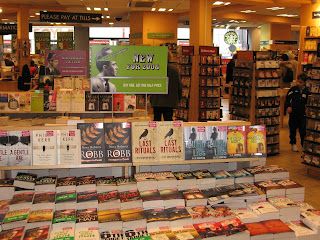 I just returned Sunday night from England, and it's only Thursday now, but my time spent across the "pond" seems like ages ago. A few people have asked, "Did you go for a book tour?" The answer is no. A few others have asked, "Did you go for your book?" In that case, the answer is yes. There's a difference. Really.
When I planned the trip, I certainly hoped I would have the opportunity to do some "promotional" activities -- and made it clear to the publicist at my publisher that I was at her disposal -- but really, I planned to go regardless. It was a good excuse to visit England and I just wanted to see my book on a store shelf! (Like this picture above)
Until just a week or two before I left Orlando, I thought that would be the extent of it. Shortly before our departure, though, I started getting emails from the publicist about wanti 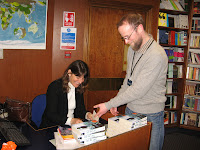 ng to schedule various events. So yes, it turned into a mini-book tour, I suppose, though our sightseeing heavily outweighed promotional events!
It was all a bit surreal. I did two newspaper interviews, three BBC radio interviews, and signed stock in a few stores in London. The neatest part, by far, was just seeing the book on the shelves. That was a lifelong dream, and regardless of anything else, I'll carry that with me for a long time.The radio interviews were scary. I was nervous before each one (can you tell from the picture?), although once I started talking, I was okay. Ironically, 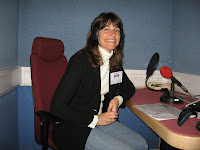 the day or two before the interviews, there had been a big story in the news about the sentencing of some youths who had beat a man to death. Apparently, the sentence was somewhat light given the crime, and the man's wife was calling for the reinstatement of the death penalty in England. Well, one of the "issues" in my novel is the death penalty (my main character opposes it, but fudges his position to get elected as DA), and thank God my publicist gave me a heads up about this current event before the interviews! Each radio interviewer wanted to talk about it. Until then, most interviews I'd done focused on other aspects of the novel, or on why I left law to write, or whether my characters were fictional (I always get a kick out of that question!).
England itself was fantastic. We had three days of sunny weather, temperatures in the 50's (everyone kept telling us how unusual that was, and I told them we brought it from Florida!). The fourth day turned overcast and cold, but the last few days were sunny again (though still cold). We spent our first two days in Berkhamsted with a friend, taking a day trip f 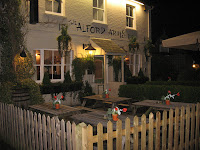 rom there to get a personal tour of Oxford from an English author, Nick Page, who is a friend of our Berkhamsted friend. We had dinner at a cute little country pub called the Alford Arms, just outside of Berkhamsted.
On Wednesday we went into London, and that's the day I did most of the book events (though every day we stopped in book stores!). We had dinner that night with a bunch of folks from Macmillan. They were a great group of people and I immediately felt as ease with them. I think we sat in the restaurant talking and drinking wine for almost 4-1/2 hours. (I love doing this, but my poor hubby can get very fidgety with lingering after the meal is done . . . He was incredibly patient and good-natured about it, though.)
We stayed in a little boutique hotel called Hazlitt's. I would highly recommend it, especially for writers. It's just off of Soho Square. They have a tradition of published authors leaving signed copies of their books, and they have a glass case in a small drawing room where they display them all. I left them one of mine to be added to the group! It was pretty cool for this newbie.
Other than this, we did all the typical tourist things -- Tower of London, Buckingham Palace, Westminster Abbey, Portobello Road Market, St. Paul's Cathedral, London Eye, Harrods, Harvey Nichols, saw a show in the West End, etc. . . . I wanted to go to Shakespeare's Globe Theatre but we ran out of time, and I decided it would be better in warm weather anyway, when we could see a play. I also wanted to see the Tate Modern, but we didn't get there, either. Next time, for sure. And of course we visited bookstore after bookstore. I could have spent hours in Foyles. I was impressed by how many bookstores one small country can support. Sometimes there would be 3 or 4 right near each other, and all were crowded. Who says reading is dead?
I wanted to get down to Dorset to meet my new online friend Innky (his real name is Andy, but he owns an inn, Mortons House Hotel, so he goes by Innky on our online writing community site). I think he was the first Brit to buy my book, and he's been really supportive, plugging it for me at every turn. He's written his own book -- Innkeeping with Mr Fawlty: The Confessions of an Hotelier -- and I understand it's supposed to be quite funny. I'm waiting for my copy to arrive as I type, so I'll post more about it later once I've read it. Anyway, Dorset, Mortons House, and Innky are on the musst-see list for our "warmer weather" trip.
One last pic -- in the airport bookstore (W.H. Smith) on the way home . . . 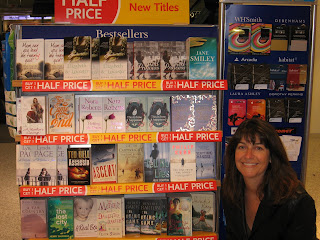