To finish out the year, I give you my Nov/Dec '10 Slice of Life column from Lake Mary Life Magazine, about holiday visitors . . . mothers-in-law.
Happy New Year!
Julie's Slice of Life: "Sunny" Days are Here Again*
Thanksgiving is just around the corner, the day most people view as the official start of the holiday season (all except retailers, who, let’s face it, would start putting up Christmas decorations on Independence Day if they thought it would increase sales). And with the holiday season come visits from out-of-town relatives – those who lavishly shower us with the glad tidings and good cheer we look forward to, and those who, like the love bugs that visit our state every May and September, express their love by descending upon their helpless hosts and refusing to leave until they’ve sullied every surface in sight. If you’re lucky, your relatives bear a closer resemblance to the characters in a Christmas carol than a scary movie, but like the saying goes, even the best guests, like fish, can start to smell after a few days.
Unless, of course, the guest is my mother-in-law, Sunny.
When she and my father-in-law pull into our driveway after a sixteen hour car ride from St. Louis, they bring with them a hurricane-force wind of good will and upbeat attitude. You’ve heard of Norman Vincent Peale, the author of The Power of Positive Thinking? Well, I’m convinced that man learned everything he knows from my mother-in-law. When she leaves a few days later, the only reason I could possibly give for wanting to see her go is that, as the perfect guest, her exemplary behavior highlights the fact that I am far from the perfect hostess.
It begins when we open the door to greet them. Where other relatives might whine about the long drive, lament that they didn’t take a plane, or moan about how “beat” they are, my energetic, seventy-something mother-in-law says, “So what should we do first?” And she doesn’t mean take a nap. During her last visit, we went zip-lining at the Central Florida Zoo. 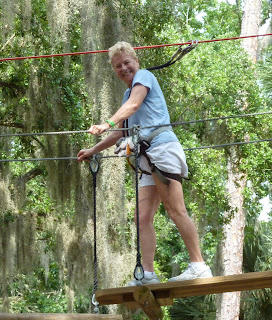 Her conduct as a guest is beyond reproach. When I make a meal, she asks how she can help, and when time comes to clean up, I have to throw her out of the kitchen or she’ll do the job herself while my back is turned. If I forget and leave wash in the machine, I later discover it dried and folded on my bed. If I accidentally sleep in one morning, I wake to find the coffee made and fresh, cut-up fruit on the kitchen table. Where many women I know grow weary from the subtle insults they endure from their mother-in-laws, mine repeatedly tells me I’m just like a daughter to her and thanks me for loving and taking care of her son.

Her presence causes a miraculous change in our children. Suddenly, they don’t fight. They give hugs and kisses without reserve. My fifteen year old daughter, who sees nothing wrong with calling me to bring the car and pick her up from the bus stop at the front of our neighborhood, magically becomes willing to take long walks on the Seminole-Wekiva trail. My eighteen year old agrees to watch The Man from Snowy River, where normally she views any film made prior to 2005 old-fashioned and boring (not to mention, she adds, the special effects are downright laughable).
It’s true. I am that rare breed of daughter-in-law who actually likes my mother-in-law and looks forward to her visits. I love her, too, of course. After all, she’s family. But to like someone can often be a greater compliment because it comes not from obligation, but from genuine respect and admiration for the beneficiary.

Because my mother-in-law resembles Julie Andrews, my husband and I used to watch The Sound of Music with our girls and tell them their grandma was once an actress, and that she played the character of Maria in the movie. Ditto for Mary Poppins. They believed us, and looking back at the nature of both those lead characters, I realize it was as much their grandmother’s cheerful personality as her similar appearance that caused them to fall for our white lie.
No wonder her father nicknamed her Sunny.
_________________________
*(Originally published in the Nov/Dec 2010 issue of Lake Mary Life Magazine.)
Posted by Julie Compton at 12:14 PM 4 comments: