Ellie Grossman and the "Mishegas of Motherhood"

I've been meaning to write about my Rescuing Olivia book tour, but the demands of the tour itself have kept me from doing so. I'm such a limp rag at the end of each day, I can barely eek out a meal for my family (when I'm home), so trying to eek out words that make sense would be futile. The few times I've tried, the words fell flat on the page. So I resigned myself to waiting. Instead, I've tried to keep folks updated by comments and pictures on Facebook (some are on my regular page, some are on the Fan page . . . still figuring that out . . . Eventually, I'll post some of my favorite pictures here, too. 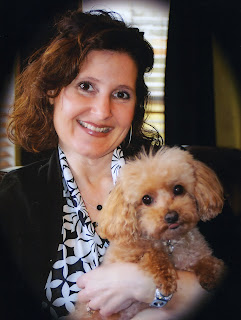 In the meantime, I'd like to keep a promise I made long ago and introduce my readers to Ellie Grossman (at left, with dog Luci), someone I first "met" when I was promoting Tell No Lies. We have many things in common: she's from St. Louis, too (but unlike me, she still lives there), she's a mom, a writer, a Parkway North alum, and interestingly enough, we share the same name (my maiden name is Grossman), though as best as we can tell, we're not related. I remember her in high school, but she was a grade below me and we never met back then. She wrote to me after hearing about Tell No Lies, and I discovered she wrote a fantastic blog, "Mishegas of Motherhood," which also runs as a column in the St. Louis Jewish Light newspaper. It's been almost two years since I first asked to interview her – she truly is a pillar of patience – and finally, I have. I'll let her do the heavy lifting, but I must say this – she's a funny, funny gal. After you read the interview, check out her website at "Mishegas of Motherhood." You'll be glad you did.

Julie: Tell us a little bit about Ellie Grossman.

Ellie: I knew I was hooked on writing when I was a student at the University of Missouri School of Journalism in the mid 1980s and saw my first full-length feature story published on the cover of the Columbia Missourian. My in-depth investigation on the latest trends in salad bars, which included quotes about garbanzo beans from the produce manager, impressed the editor so much that she let me skip class to hang out at a local bar and research the college craze of drinking flavored schnapps shooters with weird names like “Fuzzy Navel,” (made with orange juice), “Buttery Nipple,” (mixed with butterscotch), and “Sex on the Beach,” (blended with cranberry juice). To this day, a fruity cocktail reminds me of my college days and brings a smile to my face.

After I graduated in 1986 with a Bachelor of Journalism degree in “ego,” I visited the Big Apple to brainstorm ideas with editors at Conde Nast, Meredith , Fairchild, and other major publishers to find out how a Midwest girl like me could break into the freelance writing business. The most important life lesson that I learned on that trip is to never wear high heeled pumps (especially fuchsia colored) when walking up and down the sidewalks of Madison Avenue and Broadway, even though tearing up my shoes and twisting my ankles led to my first paid writing assignment at Woman Magazine.

Right after I landed my first national byline, I got a letter from another magazine writer with my same name, Ellie Grossman the “Grammar Guru”, who told me to change my name because she was in the business longer and it would only confuse editors, so that’s when I started using my initial as Ellie S. Grossman. I’ve had other aliases throughout my career, including L.E. Brighton, that came in handy whenever I wrote restaurant reviews and had to disguise my identity.

Over the last two decades, I’ve written just about everything for a buck, including obituaries, city council meetings, book reviews, advertising copywriting, newsletters, fashion trends, real estate, health care, you name it, but my niche has always been newspaper and magazine features. Right before I got married in 1993 to a fellow native St Louisan, Scott Cohen, I actually had a “real” fulltime job writing direct mail pieces for a medical publishing company—ho hum—but that changed soon after my first child Jack was born in 1995, and motherhood became my new beat. I also have a daughter, Sari, who is now 11 years old.

As a new “stay-at-home mom who never stays home” (that’s my official title on my business card), I started to write about what I know best—fun things to do with kids so parents don’t lose their minds. In those days, I wrote for an entertainment supplement called “Get Out!” in the St. Louis Post Dispatch and toted a stroller and café latte all over town, reporting on everything from the best shaded playgrounds to storytelling events at bookstores. I’ve been told by readers that many of my clips ended up on their refrigerator magnets.

Julie: Your blog/column is called "Mishegas of Motherhood." Can you explain the meaning of the Yiddish word "mishegas" for readers who might not know? How did you come to write this column? And how does your family feel about being the subject of some of your columns?

Ellie: My proudest journalistic accomplishment, so far, is creating my weekly parenting humor column “Mishegas of Motherhood,” which is published in the St. Louis Jewish Light and picked up by other Jewish media as well. I gave birth to “Mishegas of Motherhood” four years ago, and I must say writing a first-person column has been a great gig and has opened a lot of doors for me, including guest speaking for various organizations and mostly building a loyal readership.

According to The Joys of Yiddish, the word mishegas (pronounced mish-eh-goss) literally means insanity or madness, but I refer to it in my website in a more lighthearted kind of way, such as how kids drive their parents crazy.

Basically, I wanted to find a niche in my writing and do something that hadn’t been done before. There are countless, boring mommy blogs out there, and I wanted to be different, provide something funny and entertaining, but also with value and not just fluff. My writing has always been a little tongue and cheek, but this time I gave it a Jewish twist. My columns are based on my own family and real life experiences, and while I sometimes poke fun at my husband and kids, I never invade their privacy or hurt their feelings, at least not intentionally. Besides, they don’t seem to care or even notice when I write about them because they rarely read my stuff anyway.

Julie: Is it difficult to come up with new topics to write about each week, or do you find they almost write themselves?

Ellie: I’m never at a loss for story ideas for very long. When it comes to writer’s block, my best advice came from the late, great humorist writer Erma Bombeck, who told me personally at a journalism school seminar years ago, “Writer’s block is like North Dakota. It doesn’t exist. Well, has anyone ever seen North Dakota?”

Julie: You have a section on your website called Readers Favorites. Have you noticed that certain topics tend to become favorites?

Ellie: Interestingly, I’m surprised at how widespread my readership has grown. According to my weekly website traffic reports, I get hits from all over the world, including Canada, Israel, United Kingdom, Australia, China, and even the small Carribbean island of Tobago, which is actually the birthplace of the limbo, go figure.

While I write about Jewish holidays and traditions and learn a lot about my own religion in the process, some of my favorite columns have nothing to do with being a Jew. For example, I got a lot of feedback on the piece about my preschool daughter’s horrific experience with lice, the philosophical narrative on what dogs teach us about life, and the column on my obsession with the food network (even Paula Deen’s people liked it and sent me a subscription to her magazine). My all time favorite column, “Why Jews Don’t Camp,” won a national writing contest and led me to Hollywood.

Julie: Yes, you've had a brush with Hollywood because of your column! Would you like to share what that was and how it came about?

Ellie: Back in February 2008, I submitted a version of my column on my family’s camping disaster to an Internet-based sitcom called “In The Motherhood,” and when I got the email that my story was selected to be used as a screenplay for a webisode starring comic actress Leah Remini, I thought it was a hoax. I’ve never won anything in my life, except a lottery ticket that paid me another losing lottery ticket. When I realized that I won a trip for two to Hollywood to meet the cast and producers and watch the filming of the webisode, not to mention a four night’s stay at a hotel on the Sunset Strip and a makeover at a Beverly Hills salon, I started screaming in excitement and went shopping for a new outfit. I wrote about my adventures in Hollywood, of course, and the experience remains a highlight in my career.

Julie: In addition to your column, what other types of writing do you do?

Ellie: My latest journalistic endeavor is to get into children’s book writing. In fact, I’m working on a proposal right now about my favorite subject of all, my toy poodle named Luci. So if anyone out there knows a good agent . . .

I’ve also heard positive things about self publishing, so I’m still trying to figure it all out. I have great admiration for writers like you, Julie, who are disciplined enough to get their books published and are rewarded for their hard work and talents. For me, the process of writing a book is daunting enough, plus pounding the pavement and marketing myself through blogs and social networks seems overwhelming. I’ve been writing professionally for more than two decades now, and my dream to publish a children’s book. With a lot of hard work and good luck and chutzpah (perseverance), it will happen.

Thanks so much, Ellie! In my humble opinion, though talent is required (and you clearly have that), it's often perseverance that is the key to open doors. I suspect, given what you've accomplished so far, you have a lot of that, too. Best of luck with the column and your children's book in progress!

Don't forget to check out Ellie's website at www.mishegasofmotherhood.com.