US Cover for RESCUING OLIVIA 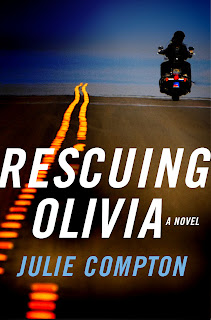 You know, it dawned on me that I never posted my US cover for Rescuing Olivia here. I remembered to do it on my Facebook page, and hopefully my website will be updated soon to give readers much more information about the book (coming on February 2 in the US, May 7 in the UK), but for some reason I neglected my blog . . .
It's a very different type of image than the UK cover, but I think the two complement each other perfectly. This cover does a wonderful job of symbolizing the plot, while the UK cover captures the theme of the novel so well.
What I especially love about this particular image is how the road almost looks like sand, and the mirage suggests the ocean. And seeing as a large part of the story is set in Florida, well . . . you get the idea.

Sorry Justice Roberts, but you're wrong

What am I talking about?

As reported by the Washington Post, the US Supreme Court in Virginia v. Harris recently decided not to take the appeal in a case where the Virginia Supreme Court overturned a drunk driving conviction because the arresting officer didn't actually see the driver breaking any laws, but instead pulled him over because of an anonymous tip that he was driving while intoxicated. Although many states have ruled the Fourth Amendment prohibition against unreasonable search and seizure is not violated by allowing an officer to pull a driver over based solely on an anonymous tip, there are several states that have ruled such action is unconstitutional. Virginia is one of them. It ruled that without the officer seeing some erratic behavior on the part of the driver, he lacked a reasonable suspicion of criminal activity to warrant the stop. Without that reasonable suspicion, the Fourth Amendment's prohibition against unreasonable search and seizure is violated.

In a dissent to the Court's decision not to take the appeal (the majority did not give a reason for its decision, which is common), Justice Roberts said: "The decision below commands that police officers following a driver reported to be drunk do nothing until they see the driver actually do something unsafe on the road — by which time it may be too late."

It's a tempting argument, one that appeals to the emotions and seems, on its face, logical. But in my humble opinion, it's wrong.

But there are many wrongs we'd like to stop before they happen; there are many crimes being committed behind closed doors that we may never know of because, in this country, at least, the cops aren't allowed to enter someone's home or other "private" space solely because some anonymous person told them a crime was being committed. It's a slippery slope. If a police officer can pull someone over solely based on an anonymous tip, what's to stop authorities from arguing that they should be able to enter someone's home based on a similar sort of tip? Justice Roberts says drunk driving is different, but why? How is it any different? And if you think this is okay, you'd better beware your neighbor who's mad at you because your dog got loose on his lawn, or that co-worker who doesn't like that you got the promotion before he did. Or what about your wife's ex-husband? Maybe he still hasn't gotten over the split, and he wants revenge. Are you worried about your children being on the internet, and how the kids "flame" each other over the smallest slight? Imagine a teen who realizes she can create havoc simply with a brief, anonymous call to the cops.

There are those who subscribe to the argument that as long as you're doing nothing wrong, you have nothing to worry about. I beg to differ. If this were the case, we could toss out the Fourth Amendment altogether. Spend some time talking to folks who come from other countries that lack the protections we have, who never know when authorities might be banging on their door, barging in to take a look around for no other reason than they "received an anonymous tip," and I think you'll come to understand the importance of this particular constitutional protection.
Posted by Julie Compton at 11:20 AM No comments:

So much to share today! I should split it up into several posts, I suppose, but knowing me, I wouldn't get back to the blog for a week and then it would all be old news . . .
Rick's at Frankfurt Book Fair again. He attends every year, and some of you might remember when he went in Fall 2007, just before TELL NO LIES came out in the UK, he sent back pictures of the wonderful display Macmillan had of my UK book cover.
Well, in my opinion, Macmillan has topped the TELL NO LIES display (there are even lights this time)! These pictures of the RESCUING OLIVIA display, just in yesterday and today, are from Rick's Blackberry: 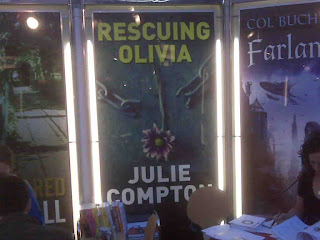 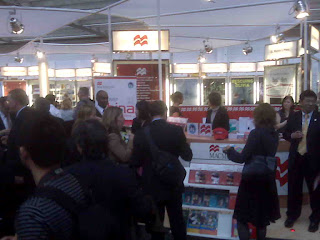 The one above is self-explanatory, but on the right, if you look close, in the background to the right, you can see the display of RESCUING OLIVIA in the context of the entire Macmillan booth. I'm lucky I have a husband who attends this fair for his job or I'd never even know these displays existed.

The other item to share is not only news, but it's also a recommendation. If you've never heard of The Rose & Thorn, you need to check it out. I've subscribed to the newsletter for this online journal for some years now, and it's always been a first class e-zine with some excellent writing, but the journal recently underwent a "renovation" and it's now better than ever. My new online friend and author of the Gumbo Writer blog, Angie Ledbetter, is one of the co-editors. I've been reading The Rose & Thorn for years, but I recently stumbled across Angie's blog and only learned she was associated with this journal after we'd exchanged a few emails. (These types of connections happen all the time to me. The writing community is smaller than most people think.)

Anyway, I hope you'll check out The Rose & Thorn Journal. You won't be disappointed! 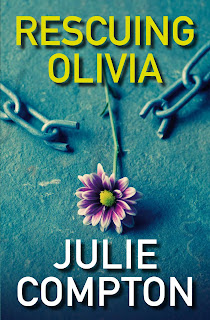 I'm so pleased to be able to share the cover art for the UK edition of my second novel, RESCUING OLIVIA. My editor at Pan Macmillan sent it to me late last week, and I haven't been able to stop smiling. I'm thrilled with it! The designer did such a fabulous job of capturing the essence of the story with just this one image. (Of course, you'll have to read it to know why I say this . . .)

Though the US edition comes out on February 2, the scheduled release date for the UK edition (with this cover) is later -- May 7. I'll be sure to post if that changes.
Posted by Julie Compton at 11:51 AM No comments: