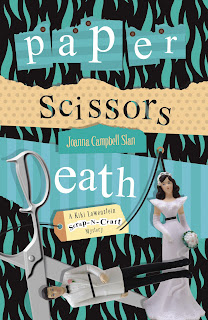 On October 11, I'll be at the Big Read Festival in St. Louis. I'll be on a panel with mystery authors Tess Gerritsen and Emilie Richards. (Okay, I'm nervous just saying that! I mean, those are some big names in the book world!) But I think my nerves will be calmed somewhat because Joanna Slan, the President of the local Sisters in Crime chapter, will be moderating.

In our discussions about the upcoming panel, Joanna and I got a chance to know each other a little bit, and it's apparent to me that Joanna has one of those plucky personalities that can make even the gruffest person smile. She's full of energy and positive attitude, and it rubs off on anyone who crosses her path.

Joanna's celebrating the recent release (September 1, 2008) of her first novel, Paper, Scissors, Death, the first in The Kiki Lowenstein Scrap-N-Craft Mystery Series. She took a few minutes out of her busy schedule to answer some questions. I hope you'll take a few moments to learn a bit about Joanna and her novel, and if you're in the St. Louis area on October 11, come out and see all of us!

Julie: I must admit, this is the first time I've ever seen a novel in which scrapbooking played a major role. Why scrapbooking?

Joanna: Scrapbookers are very passionate people. We create pages—which are very artistic and time-consuming—about our families, our friends and our lives. Seemed to me that with all that emotional investment (plus sharp tools like craft knives and chemicals like glue), murder was bound to happen. Besides, one in every three homes in the US has a scrapbooker in it. There’s bound to be a few who either have or have wanted to strangle someone!

Julie: Tell us about your heroine, Kiki Lowenstein, and how you came up with her story.

Joanna: She’s a lot like me. She looks a lot dumber than she is. She ticks people off, although she doesn’t mean to. She apologizes to grocery carts when she bumps them. She worries a lot, but probably about all the wrong things. She loves animals, hates bullies, adores scrapbooking and she’s very hard on herself.

Ironically, now that other scrapbookers are reading Paper, Scissors, Death, they tell me they see themselves in Kiki!

Joanna: I felt that St. Louis was underused as a setting. This is such a quirky place. You’ve got mystery and history. Where else can you visit the zoo and not get a straw in your drink because it could hurt the animals, but you CAN buy yourself a beer? We finally slipped to #2 in murders in the country, so I figured I better hurry up and write this before we became all boring.

Julie: Since everyone asks me this question, I'll ask you: Are any of the characters in your novel based upon real people?

Joanna: Yep. Me. And there are aspects of people I’ve known in a lot of my characters. Mert, Kiki’s best friend, is also her former cleaning lady. She carries around business cards that read, “Got dirt? Get Mert.” And she’s patterned after a cleaning lady we once had who bragged to me, “I got me a vacuum cleaner that can suck up a bowling ball.” Luckily, we don’t bowl. I did make sure the dogs were in their crate before she came.

Julie: You've been a writer for some time, but this is your first novel. What made you want to write a mystery (a series, in fact)? How did the process differ for you, if at all, from writing non-fiction? And tell us a little about the road to getting your novel published.

Joanna: Oh, I think lying is fun. And even though I wrote fiction, I was always interested in stories. In fact one of my books is a college textbook on using stories when you are public speaking. It’s called Using Stories and Humor: Grab Your Audience. Sounds faintly violent, doesn’t it?

The process is different in that you have so much bigger of a canvas, of a universe when you write fiction and it’s a challenge to narrow that down so your plot is zingy.

I started working on the book and then went to SleuthFest. There I pitched a young man from New York who thought I was nuts. “Who cares about scrapbooking?” he said. Yeah, well, hell-oo. The entire world does NOT revolve around Times Square, bud.

The second agent I pitched loved the idea, and thought I was a hoot.

Julie: Any advice for aspiring writers?

Joanna: Enter at your own risk. Woooo-ha-ha-ha. This is a weird world, and if you aren’t absolutely compelled to write, it might be tough going. Find some good friends in the business. Learn as much as you can. Smile and be professional. And write a darn good book!